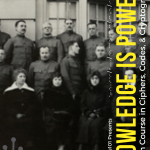 This week I stumbled across a little known photograph that took me down a rabbit hole of codes, ciphers and cryptic messages  –

Read on to find the hidden code in this image.

For those following me on twitter or FB, I asked the importance of this 1918 image?

Turns out, this photo contains a hidden message – a hidden code in plain sight!

For context, the photo is of U.S. Army code breakers trained by William Friedman and his wife Elizebeth during WW1.

William and Elizebeth Friedman had astonishing careers in cryptanalysis, and William is known today as the father of modern American cryptology (Source).

If you look closely, you’ll note soldiers are either facing forward towards the camera, while others are facing to the side –

Using the Baconian Cipher (or Bacon’s Cipher) the soldiers can be divided into groups of 5, and the secret message decoded using the A/B system.

Before I give away the secret message however, let’s take a quick lesson into how codes, ciphers and cryptography work.

Codes – Codes are used to translate whole words into other words, phrases or numbers.

Cryptography – Is the art / science of writing and deciphering codes.

Cryptanalysis – the term used for the study of methods for obtaining the meaning of encrypted information without access to the key normally required to do so. I.e. the study of how to crack encryption algorithms or their implementations.

The most famous of these is the enigma machine – which encoded German communications during WWII.

Within the Baconian Cipher each letter of the plain text is replaced by a group of five ‘A’s, or ‘B’s – according to the key below:

In our context, Friedman employed the Baconian cipher with soldiers facing towards the camera, and others facing away.

The crucial part about Bacon’s system is that the a’s, and b’s do not actually need to be represented by the letters explicitly.

In his system, the a’s and b’s could be divided into any two distinct classes – such as fruit (e.g. apples & oranges) or open and shut windows in a photograph.

The secret message, hidden in plain sight was the famous Baconian motto “Knowledge is power,” but there were insufficient people to complete the ‘R’ (and apparently one soldier in the ‘W’ group looked the wrong way) –

William Friedman was particularly fond of this photo and kept this picture on his desk at home and in his office.

An advanced method of this cipher involves converting your coded message into binary code (1’s and 0’s) and overlaying it with a corresponding block of cover text.

Secret Message: “BACON TAUGHT ME HOW TO THINK”

Which can be hidden in a sentence of corresponding letters (23 blocks x 5 binary numbers = 115 characters).

I found a corresponding sentence from a random Wikipedia page on Selective Hearing:

“Selective auditory attention is a type of selective attention where ones auditory directed at things people are interested in hearing.” (115 characters)

Which looks like this when it’s broken up the text into blocks of 5 (to match the binary code):

And then overlay the blocks of text with the binary blocks:

And finally, put it back together making the 1’s boldface within the sentence.

The cover-text is written as:

Selective auditory attention is a type of selective attention where ones auditory directed at things people are interested in hearing.

Other Ciphers and Ways to Code Messages

Can you decipher this code?

or perhaps most famous;

International Morse Code, used for communicating via electronic communication, with lights or sound – Morse code is probably the most well-known form of code / cipher.

You’re now an expert in codes so decipher the Pigpen code above – post in the comments once complete.