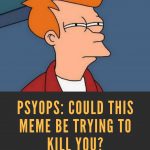 I just finished reading a study on ‘the Utility of Memes for U.S. Government Influence Campaigns’, released by the CNA, a nonprofit research and analysis organization.

This was probably one of the most interesting article I’ve read in months.

You would have to be living under a rock to be unaware of news about Russian information operations, and recent PSYOPS initiatives à la Cambridge Analytica; but,

Could sharing funny memes actually be used as a form of information warfare?

The CNA suggests they could!

Read the full CNA article at this link here, or you can download a PDF version here.

How Could Memes Be Used In Information Operations?

Inoculate: To use a meme in an effort to protect against a threat or anticipated attack.

Infect: To use a meme to spread a specific message—that aligns with broader mission objectives.

Treat. To use a meme to treat an already circulating message.

Conclusion. Memes have significant potential for enhancing influence campaigns but additional research is needed to understand how to employ them effectively.

Have you got experience working in PSYOPS? Are you part of the information operation community? If so, tell us – Do you think Memes have potential in Information Warfare? And more specifically, how could they be measured (i.e. shares, comments)?